In 2013, I moved to the Ingleside neighborhood of San Francisco, and I became involved in several public art efforts. Through my role as the Associate Director of the Ocean Avenue Association, I collaborated on efforts to beautify two publicly-owned parcels of land at Ocean and Geneva avenues, commission two large-scale murals on Ocean Avenue, install banners designed by local artists on 50 street light poles, and organize community events and fundraisers in the neighborhood.

This project took two disused pieces of publicly-owned land and created a space replete with California native plants, a curved retaining wall made of logs, granite boulders and a vibrant mural designed and painted by 1AM muralists. I managed this project for the Ocean Avenue Association. 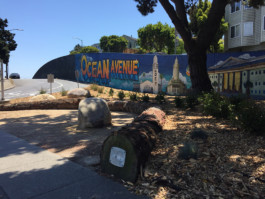 I managed a project for the Ocean Avenue Association to install permanent streetlight banners on Ocean Avenue in 2018. The posters featuring designs by San Francisco artists Ekevara Kitpowsong and Pixelstud™. Both works of art prominently feature the former El Rey theater. The banners' original art was initially displayed on Ocean Avenue along with 72 other artists' work as part of a project called Arts Alive Ingleside, to which I also contributed an original banner. 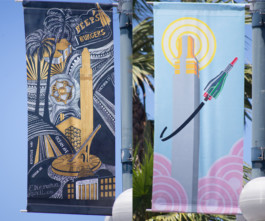 I have helped organize many community events on Ocean Avenue including craft fairs, bar crawls and live music in Ocean Avenue businesses. I host a monthly reading series called Lit Night at Ocean Ale House on the third Monday of each month.

I am currently working as the project manager for a new custom gate to be installed at Ingleside Library. The gate will be made of steel, and its design incorporates natural motifs of wind, water and earth.